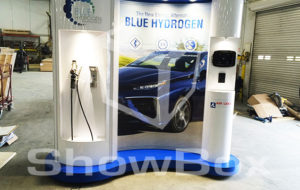 Air Liquide, a leader in specialized gases for industry, health, and environment continues its networking and marketing efforts via trade shows and events across the nation. The company partnered with ShowBox Exhibits to further its position as a leader in their market, known industry-wide for unsurpassed quality. With varying stipulations from event to event, the Company sought out ShowBox Exhibits’ expertise to design multiple booths and ensure they were aligned with site regulations.

ShowBox Exhibits was challenged with constructing multiple booths for different events. Air Liquide requested modular booths for trade shows, a Hydro filling station kiosk for automobile conferences, and a brewery-themed exhibit booth for a brewery conference. The booths had to be designed for durability, portability, and compliance to site requirements. 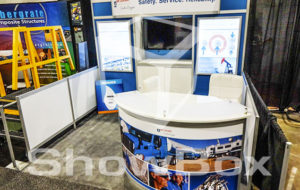 Interestingly enough, Air Liquide is a provider of gases to the craft brewery industry. As a participant in the Craft Brewers Conference, ShowBox and Air Liquide collaborated on a booth theme fitting for a brewery convention. By utilizing fabric printed with brick-themed graphics for a backdrop and modern industrial furniture, they were able to transform the booth into a pseudo microbrewery.

Additionally, ShowBox Exhibits designed three sizes of booths for other tradeshows: a 10×10, 10×20, and 10×30. Backlit graphics were mounted on the back wall of the10x10 booth. The 10×20 and 10×30 booth were decorated in Air Liquide-branded graphics and provided space for Air Liquide’s large exhibit, a welding machine that functioned using Air Liquide’s specialized gases.

Finally, ShowBox was able to create a mock-up of Air Liquide’s Blue Hydrogen filling station using a combination of Plexiglass, wooden laminate, and Sintra graphics. With the purpose of promoting hydrogen-fueled vehicles across the US, this model was designed to be shipped to any of the automobile shows throughout the nation.

Working with ShowBox was a great testament to its depth and breadth of possibilities, we worked very well together in tackling all of our custom-made booths including a mock-up fuel station and a brewery scene.

Let’s collaborate on your next project.
Within 24 hours, one of our highly qualified team members will reach out to you.